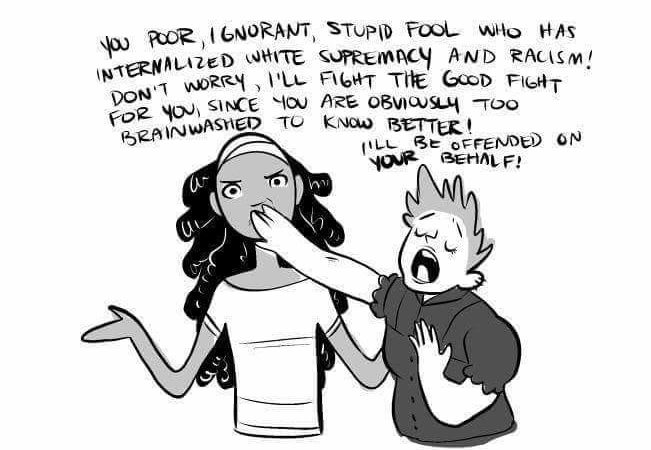 “Our enemy is the soft bigotry of low expectations.”

Today, the phrase is best used to describe Leftist treatment of minority communities, as if dealing with an ignorant and unruly child: “Lowered expectations.”

Perhaps you’ve heard or seen this in action recently without even realizing it. You could see it among the talking heads who grasped at straws and found excuses for the black community to destroy their own neighborhoods. Many of them abusing MLK’s quote to justify riots in spite of the context of his statements.

State and City governments also played their part by excusing covid mandates for mask wearing and social distancing only for “protesters” (given that the cause is approved of course).

Or perhaps you’ve seen education systems play their part; lowering or eliminating rigurous academic standards in favor of intersectional quotas – in doing so they’ve sacrificed the once highly favored standards they boasted anout exchange for the virtue of being depicted as diverse and inclusive.

You may have never experienced it for yourself but as a Black-Mexican America, I have always been told I was “whitewashed” or “not black.” Those statements were based on the way I spoke, dressed, thought, my academic achievements, and my beliefs. I refused to speak ebonics (though I can), I refused to sag my pants, I refused to lower my standards and expectations, and I am a conservative. I excelled in school, attended UCLA on (almost) a full-ride of scholarships and garnered a graduate degree at USC – somehow refusing to be indoctrinated by Leftism.

For these reasons, even some of my well-meaning friends and colleagues, have labeled me “the whitest black guy” they know.

I detest that label whole-heartedly but I also don’t fault them. Unfortunately, the black community has, as a culture, lowered themselves so much so that the stereotype now dictates the expectation. Though I grew up in the ghetto (Los Angeles Housing Projects), my lack of ghetto mentality reduced my blackness to null – to them and to other blacks around me.

This was first recognized by my own community who labeled me “white boy” despite knowing my Black father and Mexican mother and in full view of my well worn bronze skin.

Like a bucket of crabs, the Black community specifically, has a tendency to bring down their black members that dare escape or break the mold and become successful professionals – let alone socio-politico conservatives.

I bring you this long introductory background to bring you understanding in regard to my (perhaps) exaggerated reaction to the Smithsonian’s publication of a ridiculous information graphic labeled, “Aspects & Assumptions of Whiteness & White Culture in the United States.”

First and foremost, consider the explanation of what the hell the title means by reading the grey section underneath – “…we have all internalized some aspects of white culture.”

Okay fine, lets assume they’re correct for a moment. Now ask, why is that problematic?

Perhaps its the assumption that being White is a problem in itself. Leftists think so.

It would be the expectation in Japan to do as the Japanese do (culturally). The US is still 73% White (of various European origins). It’s logical that European ideals and custom would dominate the nation’s cultural framework.

As the European continent came to dominated the World (technologically, politically, and so forth), even the far reaches of the earth have some sort of “internalized” influence. Consider the wearing of Suits with various styling of jackets or ties. Suits originate in Europe but can be found in Africa, Asia, and South America. They’re widely accepted as a handsome formal wear for men especially of professional conduct. That norm persist even in the absence of colonization.

Is that so problematic? Not at all, unless you want it to be. And truly, I find that the Left goes searching for new ways to be offended. They thrive on it! The Left’s discontented disposition is a vital to the spread of their ideology.

So again, take a close look at list of 10 categories created by the Smithsonian consider how these things, all of which have been vital for success in American society, are indicative of “Whiteness.”

Don’t worry. As long winded as I am, I won’t nit pick the details but we have to take a closer look at SOME of these to consider how ridiculous the suggestion actually are.

What I want you to pay close attention to is the incredible display of “the soft bigotry of low expectation.” For in their declaration of these customs as being fundamental aspects of “Whiteness,” they also suggest the opposite of these (which is mostly bad) is “Black”-ness.

In other words, in their rush to explain away whiteness as a plague on America’s “colored” folk, they also insinuate that the opposite of these attributes are more at home (and therefore more natural) to non-whites. Nothing could be further from the truth. Consider a few takedowns below.

Why this is seen as a negative is amazing. While many societies practice collectivism (especially homogeneous societies), Rugged Individualism is uniquely distinct in the United States among all peoples – not just White. It is perhaps particularly strong here given the mix of cultures and peoples and the drive to settle the West.

Harriet Tubman was one of these people. Will you relegate her rugged individualism to “internalizing” Whiteness?

Similarly, the ideals of self-reliance and being in control of your environment is distinctly strong in America. Whites across Europe practice a more collective form by comparison. This attribute is American, not “White.”

The idea that the family structure is “internalized” Whiteness is heinous. Look all across the globe before European colonization and you will find similar nuclear family structures, with a few exceptions.

Consider also how 75% of black children are born to unwedding and broken fatherless homes. That statistic alone is more disastrous for the black community than if all 800,000 police officers in the US were actually racist.

To suggest blacks should discard the nuclear family structure because it is “ internalized Whitness” is tantamount to sabotage of the black community.

Interestingly enough, people like Michelle Alexander (author of the “New Jim Crow”) explain away the high rate fatherlessness in the black community as a “collective trauma” experienced by blacks when they were slaves.

How so? Well, her ilk suggest that the rape of black women by their masters made the idea of fatherlessness in the black community common and therefore a sort of culturally inherited trait.

Nothing could be further from the truth, since statistics showed that whole nuclear families among blacks (even immediately after the end of slavery) were higher than Whites in the US up until the 1920s and still relatively low (compared to today) until 1960. Those numbers took a drastic dive with the application of the welfare state.

I feel as though this category was thrown in to make an even 10 categories. It’s difficult to fathom the stupidity of having issues with “rational linear” and “objective…thinking” but then again we are talking about Leftism.

A quick understanding of the history of the scientific method would show you that while it was perfected among European scientist, philosophers and inventors, it has a strong global foundation from thinkers across the middle east to east Asia.

Perhaps I have swallowed too much internalization but it sort if makes sense to me that there would be a focus on the British Empire given that we, America, fought a War to break away from the kingdom of the English Crown… not to mention their widespread control over a large chunk of the world.

America’s founders were well schooled in Judeo-Christian understanding and faith. Many them of the faith themselves (in spite of what revisionists say).

As suggested earlier, the faith and the understanding of the concepts of faith that come about are cultural in America as a whole. Suggesting they’re exclusive to Whites is both historically inaccurate and ridiculous.

Biblically speaking, since these figures focused on Christianity, we know that Africa received knowledge of Christ early one before the disciples set forth to evangelize Europe (Acts 8). Africa was also the shelter for Christ in his early days to escape Herod, and Africa was home to some of the most important early Church fathers (including Augustine – whose writings still influence modern society).

Ironically it is the African bishop, Augustine, and later Italian philosopher and priest, Thomas Aquinas, who developed the ideas of “Just War Theory.” It is this theory that modern Leftist use as a means to criticize America for “stealing native land.” Prior to the theories promulgation among nation-states, it was common for peoples to conquer purely for purposes of gaining land – even among Natives. Just War Theory helped bring an end to such practices when these ideals were developed and applied in the West.

Of course, theres much to be said about embracing hard work for success – an ideal many black athletes today would celebrate – but perhaps they’ve just internalized too much whiteness too.

While I risk sounding redundant, I’ll leave the latter categories to your own devices.

The breakdown of the categories above were just mere examples of how ill-thought this was. While the Smithsonian recently backtracked and removed the display of these images (after much complaining) the mindset among the Left remains: If it is Americana – it is evil.

It is as if the authors of this figure looked at American culture and saw the instruments for success but became disgruntled because they chose to ignore them in their own lives.

Similarly, it is as if the authors of these figures looked upon the current deteriorated condition of black culture and found an excuse to explain it as being a more natural (and therefore superior) product for their ethnic group – rather than dare make the suggestion that there are much needed changes to be made. After-all, those needed changes might suggest embracing some of the “Whiteness” depicted in the figures above.

It’s is easier to lower expectations and to call said standard “satisfactory” than it is to endure the rigors of discipline required to improve the collective condition of a people group. Because after-all, the standard set is A product of racism.

This isn’t soft bigotry, it’s just bigotry. It was concocted to convince a subset of the American population that any improvement beyond the stereotypical image is antithetical to their very nature.

Perhaps it helps us make sense of why Leftists are opposed to the ideas of family, hard work, faith, history, science, etc. Thats fine, if your ideological framework wants to make a you a useless member of civil society, by all means go for it. But do not force the concession that such ideals are incompatible with my ethnicity. That notion racist to the core.

Their inference is this: ‘you can only retain your blackness by rejecting the things that bring you economic, physical, spiritual, and academic success.’ As Joe Biden said, merely thinking differently means “you ain’t black!”