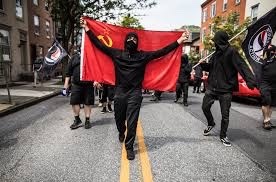 A moment that will live in the mainstream’s sound bite loop for years – or until Biden takes November 3rd.

“Stand back and Stand By.”

Article after article has run this very moment as the perfect “gotcha” moment against Trump.

So, what happened here? Lets watch below:

If we analyze the situation objectively (which no MSM group will do) we will see that Trump’s response was not an intentionally act to give “marching orders” as the media claims it to be. In fact, it was damn near similar to the prescribed statement fed to him by Wallace.

But the prescribed statement was a trap from the start.

Before he even finished the question, Trump responded “Sure.” In fact, Trump has condemned such groups on many occasions.

Unfortunately for Trump, lies like the one’s perpetuated by Biden in tonight’s debate (for example the suggestion that Trump was speaking to White Supremacists when he stated there were “Very fine people” in Charlottesville) have a louder voice than on bias news channels than the Truth.

Trump is notably perturbed by the loaded questioned asked to him – as it assumes Trump has the power to tell said groups to “stand down” – Trump then moved to ask Wallace to get specific about who he wants him to condemn. The Proud Boys are hap-hazardously thrown out as an option.

Then, in an ineloquent and fumbled delivery, Trump attempts to mimic Wallace’s “stand down” verbiage. Instead of saying “stand down” Trump responds by saying “stand back and stand by” and moves right into questioning any calls to call out Antifa by the Left. Something Biden and Democrat congress members have been unwilling to do.

Mind you – what if he said “stand down?” Would the Left not then assume he has control and power to order said groups around? But I digress.

Trump then moves the ball into the other court by stating that the violence is a Left wing problem. While Right wing extremism (especially White Supremacy) an issue – it has been BLM / Antifa that have caused BILLIONS in Burning, Looting, and Murders over this entire summer. How is it not an accurate (if not hyperbolic) statement to say that currently political extremism is a Left wing problem?

The focus on Trump’s fumbled delivery, in my opinion, does the most to cover up Biden’s dog whistle to Antifa when he said “Antifa is an idea not an organization.” That statement is a word-by-word cut and paste statement from Antifa’s dogma. The statement is a defacto condoning of their violence and terror they spread.

Antifa is very much an organization. It is an organization designed behind the “Starfish and spider” model of decentralization that has a core set of beliefs and ideals but is purposely decentralized so that they can operate independently from the national head separately. BLM and Anonymous are the same model. The Soviets also perfected this organizational model with their communist cells around the world.

Antifa is definitely a group. Antifa is a terror organization that pushes for marxist authoritarian violence. Antifa is more fascist than 99% of those they claim to oppose.

The Democrat candidate just gave them a dog whistle of support and approval. Of course he did, they’re the Democrat-Left’s militant arm; the woke version of the Democrat’s old guard, the KKK.

Did Trump stick his foot in his mouth? You bet. Did he give white supremacist groups marching orders? No – but I’ll doubt anyone who isn’t already vehemently opposed to him would agree. But its safe to say Trump delivered a crate of ammo to the gunless Left.