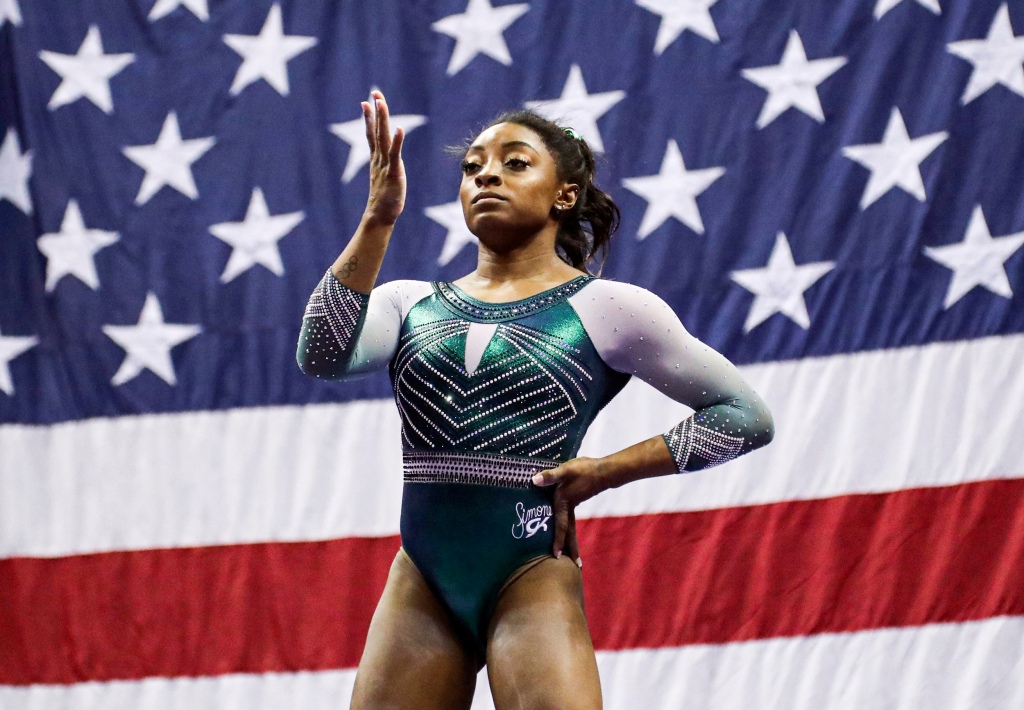 If you are watching the “2020 Olympics, ” you’re in rare company. Political activism has put a damper on the games’ viewership this year and that’s much to everyone’s chagrin.

Like some of you, in spite of being as patriotic as they come, I cannot help but snicker at the failure of certain woke personalities in these games with the NBA, women’s soccer, and more.

Of course, the so called “Woke Olympics” is also filled with many bold and proud Americans whom I gladly root for if I find time to watch it – given my 1.5 month year old and rambunctious 2.5 year old at home.

All 4 feet 10 inches of incredibly athletic muscle, Biles is the face of the summer Olympics and an incredibly dominant athlete. In fact, equity rules in gymnastics prevent her from competing at her highest level by disallowing her certain routines or moves that are far too high of a score or considered too dangerous for lesser women… Equity isn’t all that it is cracked up to be but that’s for a different story.

You may have learned that Biles recently withdrew from the team competition citing an injury (vaguely issued statement). As time went on, that was updated to show it was in fact a “mental health” matter.

As someone who performs moves that no other woman can, Biles pushes her tiny muscular frame to the limit. On her last event before withdrawing, Biles nearly injured herself on the vault before realizing she needed to “take a step back.”

By pulling herself, Biles allowed a teammate to enter who was mentally prepared and less likely to harm herself and her team’s score. That isn’t quitting or weakness – that is humility. I despise the article published by The Spectator that states she is a “quitter.” It is a foolish and rushed judgement that doesn’t consider the totality of the moment and the incredible stress a 24 year old places on herself.

Mind you I also don’t find the act heroic and I don’t think it should be taken that way. Performing despite stress is heroic… even-though sometimes it becomes overwhelming. Excuse me if I do not move to celebrate the act. I don’t think it is worthy of celebration nor attack – it should merely be respected as a personal decision.

While they’re more than within their rights to release their opinion regarding Simone, the take is just bad all-round and lacking.

Prior to reading Simone’s press conference regarding her move and the team’s subsequent 2nd Place finish, I started to liken the withdraw to Naomi’s Osaka’s withdraw from the French Open over her desire to skip press conferences… But this wasn’t the same thing.

Nevertheless, the Japanese-American, Naomi Osaka – who has wholeheartedly embraced her “blackness” and became a new face of the “woke” culture ever since she began dating her rapper boyfriend – has become a Leftwing hero and a model of “doing what you need to do for your mental health.”

“I need to go shopping. I need to splurge on vacation. I need a stiff drink. I need wild sex.” The Left’s “Yaas queen” approach of “Girl, you do you” isn’t a healthy or adequate approach to true mental health.

Biles’ similarities with Osaka stop at being black and world renowned athletes. A perusal of Biles’ social media accounts rarely shows much in terms of her political opinion. While a Democrat, the Texan strays away from “woke” egotistical mindset expressed by such crowds, Osaka included. In my opinion, this often quiet livelihood approach makes her “mental health break” feel more authentic than Osaka’s often attention seeking and headline grabbing politically infused opinions.

This isn’t to favor Biles’ mental concerns over Osaka’s. They may have both been just as legitimate as the other. What I am expressing here is how it is being framed by the Left and why right-winged “The Spectator” also got it wrong.

Also, as PROOF Blog writer CH reminded me, Osaka’s mental health break came at a convenient time prior to the biggest event of her career while she has been at the top of her game – giving her rest and recovery time while Simones’ comes during the biggest of her career and likely her last Olympic games.

As a victim of a mental-health crisis this past year (more to come on that end) it would be foolish of me to dismiss someone’s self-imposed mental health break.

While I agree with my allies on the political Right that the Left has done untold damage to the American athlete’s psyche by imposing “participation trophies,” taking away winning and losing in certain youth sports programs and dismissing grit and full-contact activities (like Dodgeball in grade school), I believe it is unwise to simply labels someone’s realization that they have a “limit” as being a “quitter.”

With that said, I would be absolutely resist the Left’s faux championing of mental health that they have expressed from the two events illustrated above.

You see, especially as black female Athletes, the Left assumes they have the final say on these points. They have run to the forefront to champion these athletes and claim victory for their own understanding on how to care for mental health.

As I have learned, the subject of mental health is extremely deep and complicated. There is no one size fit-all fix. Sometimes biting down and gritting through the pain is what is needed – perhaps a common masculine approach – and other times humbling yourself and stepping back is the right move – perhaps a common feminine approach.

What I refuse to do is pretend that the Left are Champions of mental health. This isn’t to say the Right is either – the specificity of the topic tends to get kicked down the road by both sides… but as we continue to move “forward” in our ever-woke world, we can see how much damage the Leftwing’s ideology has done to the mental health apparatus itself.

From psychologists encouraging childhood transitions, to the softening of childhood play, and the “resurrected” spirit of Dr. John William Money (the absolute creep of a guy who coined the term “gender identify”), a liberalization of the field of mental health is absolutely not improving mental health, it is harming it.

The same Left-wing ideology that encourages women to be the “same” as men in every arena (including sports) has decided that we should also not differentiate between men and women’s abilities in every day life.

Have these champions of mental health considered the stress and trauma of training and preparing to compete at the top of your game your whole life as a women only to lose to a man who wants you to make believe they are a woman?

How much more willing would Simone Biles be to push past her limit and cause possible physical harm to herself if the ROC (the unofficial Russian team) put forth a man in drag?

How is it that our Lefty friends put forth a face that supposedly Champions mental health but labels testosterone producing masculinity “toxic” and thereby labelling every classic male person “cancerous” to society. Do you consider our mental health?

Does the Left champion the mental health of women it encourages to go forward with and “shout their abortion” when women who go through with the ghastly act suffer from higher rates post traumatic stress, guilt, anxiety, depression, and other mental health issues.

How is it that the Left champions mental health and encourages “transitioning” to a different sex when Trans people (especially trans adolescents) have an extremely large “regret” rate and a suicide rate that is approximately 10x the average rate among those not suffering from gender-dysphoria. A staggering 41% will attempt suicide in their lives.

The Left, as it does so successfully, will put on an excellent campaign of support for things like mental health (as it does for women, blacks, etc). They’ll persuade many with glitz and glamour that the magic they produce from lying lips is real but peeking behind the curtain always reveals the hypocritical truth that the ideological foundation on which it stands is shifting sand.

Don’t fall for it.